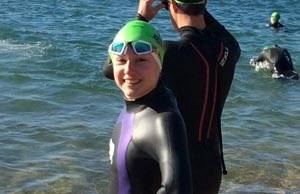 Advertised as the South Hams Triathlon the sprint distance consisted a 750m sea swim, 20km bike ride and a 5km run, and Phoebe’s performance means she was placed first in the Women’s Junior Category.

This is Phoebe’s second win in a row and to confirm her good form Phoebe was also placed 7th Overall in the Women’s category out of 138 competitors.  This was Phoebe’s first ever ‘sea’ swim event and there were many steep hills in the cycle and the run but Phoebe said she “found it extremely enjoyable”.