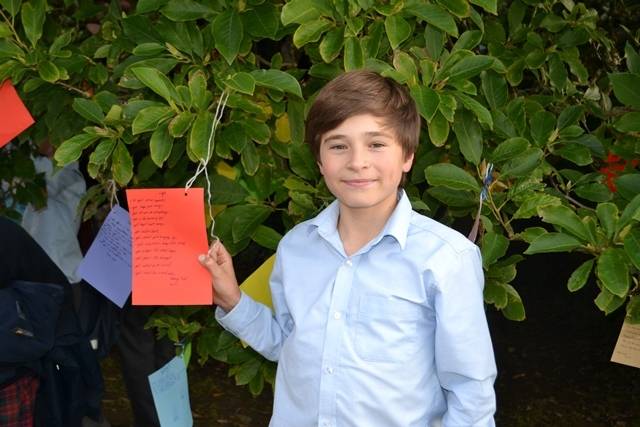 National Poetry Day on Thursday 8th October (with the theme ‘Light’) was celebrated by pupils across the Foundation, although poetry was celebrated all week both at the College and the Prep.

At the College, three of our international pupils read poems in their own language in Monday morning’s Chapel: Ro Landa read in Spanish, Marco Wong read in Cantonese and Ben Puetz read in German.  Meanwhile poems and art work have covered the walls of Main Block.  Staff were asked for their favourite poems – and the results, an eclectic mix ranging from Wordsworth to Bob Dylan – have been displayed for all to see.  The Art Department provided original art from the pupils, together with copies of famous prints, all focusing on the theme of ‘Light.’

Matt Harvey, ‘a writer, poet and enemy of all that’s difficult and upsetting’ gave an enjoyable and entertaining talk to Years 9 and 10 on Thursday.  The talk included the reading of several of his poems and discussion about where ideas come from and what it means to be a professional poet.  He finished by asking pupils to contribute the best line from their own poems on the theme of ‘Light’.  These lines were then randomly combined to create an entirely new poem.

Twenty of our most talented writers, from Years 8 – 13, joined Matt for a workshop where they explored the ancient poetic form of kennings. Starting with examples from Beowulf, where the sea is described as a ‘whale road,’ they practised their own ideas, finally contributing a line each to a group poem called, ‘The Sea'.

Meanwhile pupils in Year 8 headed up to Conway to create a Poetree, tying poems they had written to the trees. Caitlin Marsh and Katy Miles both produced very moving poems focusing on a lack of light and James Lloyd and Alex Brijnath, composed very successful rhyming poems on the power of sunlight.

The English and Art Departments have given Poetry and the theme of ‘Light’ a high profile this week; it has been a common sight to see pupils, and staff, stopping to read a poem that has caught their eye.  We’ve all enjoyed being part of the National celebrations.

At the Prep, pupils from Nursery up to Year 8 enjoyed the visit of Peter Bently, who recited some of his extremely entertaining poetry and also did some workshops with the Year 7 pupils. Prep pupils then hung their own creative poems on a poetree outside Reception.