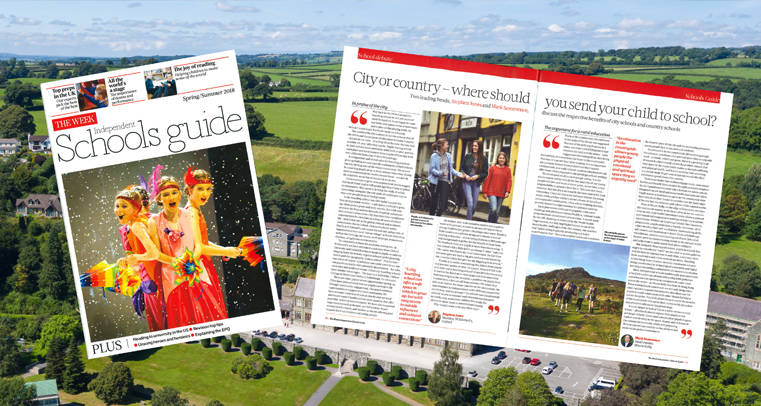 Much of the commentary that followed in the wake of the Brexit vote last year suggested that one of the defining divisions, in a rather less than United Kingdom, is that between the rural and the urban, with suggestions of a metropolitan class living lives entirely removed from the those in the countryside.  This may or may not bear close scrutiny, but young people are certainly floored when pulled from their natural environment, so a really vibrant, modern education should offer them robust exposure to the privileges of both settings.

The developed world is, of course, increasingly urban, and it is undoubtedly the environment within which the vast majority of our young people will live and work at some point during their lives, so we have a clear responsibility to prepare them for it.  This does not mean, however, that the city is necessarily the best context for their schooldays.  Clean air, and wide horizons all inform the young mind, while pitches within a stone’s throw of the school, and expansive countryside often within walking distance, provide numerous opportunities for physical exercise.

Each generation of educators grapples with a new challenge, and adolescent mental health is, without doubt, at the forefront of everyone’s minds today.  Clearly, the suggestion that country life is the cure for all such ills is too simplistic, but a recent study by the LSE, drawing on research by the WHO, not only highlighted stress as one of the major health challenges of the twenty-first century, but asserted that “urban living is quickly developing as a major contributor to this.”  This is no surprise when one considers the frenetic pace of city life and the increasing pressures young people face to succeed and conform.  As Patrick Barkham observed, children are confronted by “the incessant screens and invitations to consume that come with indoor life.”

An education in the countryside, however, allows young people the physical, emotional and spiritual space they so urgently need – to think, reflect and grow.  There is a growing body of research which clearly shows the positive impact that time spent in the countryside makes to mental wellbeing and physical health, and it is no surprise, that according to a recent study, 92% of parents would like their children to spend more time outside.

There is no doubt that children engage more, concentrate harder and benefit from creative thought processes inspired by the natural environment when lessons are taken outside. Imaginations are fired and more intellectual risks are taken.  Pupils whose schooldays are spent in the countryside raise their eyes from their books to consider not the hard edges of the city, but the richness and colour of the natural world.  As William Gilpin put it over two hundred years ago, “High places and extended views have ever been propitious to the excursions of imagination”.

Here at Mount Kelly, we place the local environment at the heart of what we do, and our own on-site, fully staffed, Adventure Centre allows a planned and considered integration of activities within our academic curriculum. Within our Learning Outside the Classroom programme, pupils undertake a variety of courses all of which develop their self-confidence, team working skills, self-esteem and motivation to learn. Duke of Edinburgh expeditions, adventurous training and Forest School all further serve to connect young minds to the natural world, and help them to understand their place within it.

But alongside these opportunities, pupils in schools that might be considered “rural”, are also able to access galleries and theatres in a regional town or city, and visits from academics and other external speakers are more common than many might expect.  In the communication age, pupils are intimately connected to the wider world and teaching is becoming more location-neutral; classrooms are now being transformed by technological innovation, and digital learning is becoming a central tenet of a modern curriculum.

Many independent schools traditionally associated with a rural education are already embracing both globalism and urbanism by opening up campuses in major cities across the world. These international endeavours are not only designed to raise capital to support bursaries, but also allow our UK pupils to build connections with other Mount Kelleians across the globe.   This allows children schooled on the western edge of Dartmoor to enjoy the benefits of the countryside whilst also having their minds opened to the abundant opportunities on offer on the global stage.

It is, therefore, too simple to look at this as a town versus country debate; all schools should expose their pupils to the privileges of both. Good rural schools allow pupils to grow, explore and develop in the space, beauty and richness of the natural environment, whilst still preparing them to operate successfully in the modern and more urban global environment.