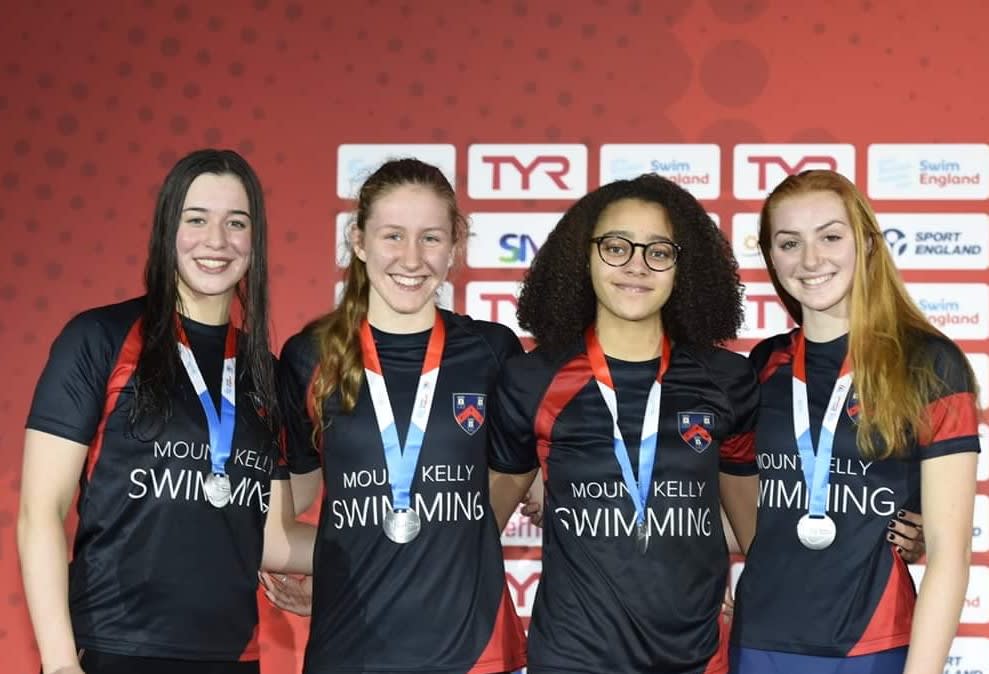 Mount Kelly produced a historic campaign at the Swim England National Winter Meet this weekend with their best ever performance at a national event:

Robbie claimed his first national title, storming to Gold in the 200m Individual Medley with a time of 1.59.40 and becoming the first Jersey swimmer to ever break the two minute barrier in this event. In the same final, Ethan swam a brilliant race to take the Bronze in a time of 2.01.03. Theo was also in action finishing 8th in the Youth Final with a new PB of 2.07.01.

In the 100m Backstroke, Katelyn won Bronze with a time of 60.52 showcasing her superb underwater skills. Leah finished 4th but smashed the 60 second barrier in the morning heats to set a new open Mount Kelly record of 59.74.

In the 100m Butterfly, Ramy set a new Lebanese age group record of 55.07 on his way to 6th place in the youth final. Katelyn was back in action in the female equivalent and also finished 6th with a time of 60.81.

Oliver smashed his lifetime best and the open Mount Kelly record in the 100m Breaststroke with a time of 61.68 and 4th place in the youth category.

Mount Kelly had some brilliant swims in the sprint events with Benji swimming to 5th youth overall in the 50m Freestyle with a new PB of 23.23. In the 50m Breaststroke, Hazal and Imogen finished 5th and 6th respectively in the youth category and both achieved Mount Kelly age group records.

Our girls then showed their strength in the 100m Freestyle with Macy taking Bronze in a new open Mount Kelly record of 55.42. Leah, Erin and Georgina all finished very highly ranked in the youth category.

In the final event of the evening, Ramy, Oliver, Max and Tom put together a very strong effort in the 4x50m Medley Relay to finish 6th with a time of 1.41.05. Ramy broke the Lebanese Senior Record in the 50m Backstroke on the lead off leg.

The first event of the evening was the 100m Ind. Medley. Hazal and Katelyn battled it out in the A final to finish 4th and 6th in the youth category, both with Mount Kelly age records. Leah, Macy and Georgina all smashed their lifetime bests in the youth final to start the evening in style.

Robbie stormed to Senior Bronze and Youth Silver in the 400m Ind. Medley with a time of 4.17.95, breaking the open Mount Kelly record time which has stood since 1986! In the same final, Ethan dropped 10 seconds in a single day claiming an emphatic Youth Bronze in a time of 4.20.49. In the youth final, Theo stepped up again to post a time of 4.25.39. All three boys broke their respective Mount Kelly age records.

Ramy lowered the Lebanese national record in the 50m Backstroke for the third time this week with a time of 25.61, breaking the Mount Kelly age record in the process.

Our girls then brought true Mount Kelly fire to the 50m Butterfly with Katelyn swimming a new lifetime best for the first time in 3 years, Hollie became the fastest ever 13 year old in Great Britain and Leah smashed her lifetime best but just missed out on the medals.

In the final event of the evening, Mount Kelly produced a stunning effort in the Women’s 4x50m Freestyle Relay. The team consisting of Macy, Leah, Erin and Elena claimed the open Silver with a huge new Mount Kelly open record time of 1.41.34. Macy also smashed the open Mount Kelly 50m Freestyle record on the first leg with 25.04.

Leah smashed the British Junior Record in the 50m Backstroke with a new mark of 27.07 to take Youth Silver and Senior Bronze. In the same final Katelyn swam to 5th youth in a time of 28.25.

Robbie claimed his second Gold of the meet with a brilliant swim in the 100m Ind. Medley in a time of 56.53. Oliver stormed to Gold in the 50m Breaststroke in a huge new PB and open MK record time of 27.89.

Our final medal of the evening came in the Women’s 4x50m Medley Relay where Leah, Hazal, Katelyn and Macy produced an epic swim to take Silver again in a new open Mount Kelly record time of 1.50.75 with exceptional splits across the board.

Ethan produced a lifetime best in the 200m Butterfly to finish 4th in the youth category. Ramy had a busy evening swimming in both the 100m Backstroke and 100m Ind. Medley, breaking the Lebanese record in both events.

In the 100m Breaststroke, Hazal and Imogen finished 4th and 12th respectively in the youth age group both in Mount Kelly age records.

On the final night of racing, Macy stormed to her first ever National Title in the 50m Freestyle taking youth Gold and senior Bronze with a huge new Mount Kelly open record time of 24.88. In the same final, Erin and Leah both swam under the British Junior Record, with Erin claiming the youth Bronze.

Max finished an agonising 4th in the 50m Butterfly in a new time of 24.86 with Ramy finishing his meet with another Lebanese record time of 25.07 in the same event.

In the final relay events of the evening, Tom, Douglas, Tom and Ethan  combined to break the Mount Kelly open record in the 4x50m Freestyle Relay on their way to 7th place against many senior programs.

Leah, Erin, Macy and Georgina were then back in action in the 4x100m Freestyle Relay where they stormed to Silver in another Mount Kelly open record of 3.43.75 to end the meet in emphatic style.