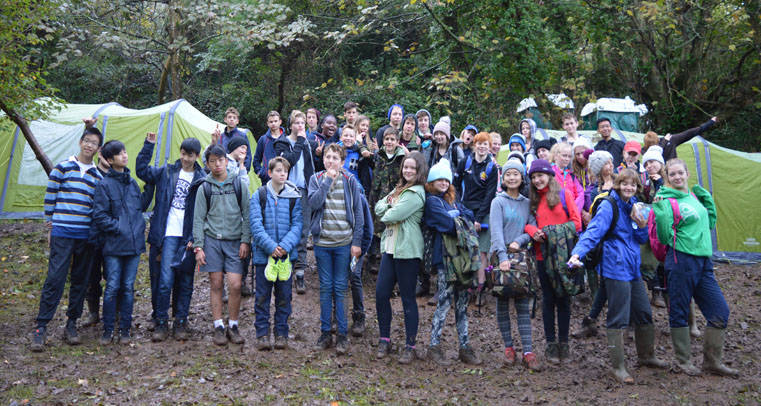 Year 9 pupils spent last week camping on the Lizard as part of their LOTC programme.  The trip began with a History lesson at Pendennis Castle, followed by a ‘murder mystery’ drama workshop using techniques learnt in class prior to departure.   After setting up camp at Fat Apples Café, and a fantastic home-cooked supper of spaghetti bolognaise, pupils headed to Porthallow beach to start work on their murder mystery stories, taking inspiration from the landscape and authors such as Conan-Doyle and Thomas Hardy.

The next day, the pupils visited RNAS Culdrose, where they were shown the unmanned aircraft and Sea Kings, and tried out the thermal imaging cameras and fire extinguishers.  A coastal walk along Lizard Point followed, as well as a surfing session, and the day was rounded off with a visit to the Lizard Lifeboat Station to listen to a sea safety briefing and watch the £2.7million boat launch on its training run for the week.

Day three was a very wet one! A slight change of plan allowed most pupils to stay reasonably dry with two surfing sessions, some Physics on the beach and a visit to the National Maritime Museum in Falmouth.  A visit from Cornwall Against Dean Super Quarry (CADS) finished off the preparation for the decision-making exercise run by Mr Francis and Mr Prettejohn, and we look forward to seeing the results of this back at school.

The sun finally came out on day four, and spirits were high despite the muddy conditions at the campsite! Pupils enjoyed Art and Physics on the beach, followed by more surfing in the afternoon.  A group went on a coastal walk via The Marconi Centre, where they enjoyed an impromptu lesson from Dr Chalk about the first transatlantic radio signal and how it represents the start of what we now have in terms of the Internet, mobile phones and satellite communications.

The final day saw a full scale pack down of the camp and an attempt to remove some of the mud from the tents, before a very quiet and sleepy drive back to school ready to complete the final decision-making phase for the Dean Quarry exercise.

It was overall a very varied week with lots of fun, activities, learning and mud, which all combined to create a fantastic experience for the Year 9 pupils, setting them up for the year of study and adventures ahead of them at the College.