Following the success of Mount Kelly pupils at A Level, the School’s GCSE candidates have risen to the challenge and secured outstanding results across the board.

Congratulations to the six pupils who achieved a grade 9 in 5 or more of their subjects with Emily achieving a grade 9 in all twelve of her subjects, Finlay getting ten grade 9s and one grade 8, Charlotte scoring eight grade 9s and three 8s and Abigail being awarded seven 9s and two 8s.

Head Master, Guy Ayling comments, ‘I am very proud of the pupils and our staff – these outstanding results have been achieved after considerable disruption across the entire two-year course, and as such they are especially impressive.’ 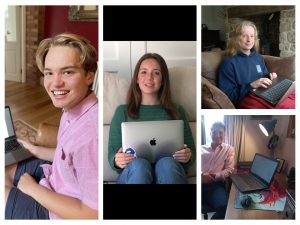 Mount Kelly is very proud to announce another year of very strong A Level results with 54% of pupils gaining A* – A grades, or equivalent, in their examinations this summer.

These grades have been awarded following not one, but two sets, of formal examinations during the Summer Term and rigorous and balanced continuous assessment of class work.

At least 78% of pupils have gained places at their first choice of university with 8 pupils gaining places overseas including institutions in the USA, Lithuania and the Netherlands.

Particular congratulations go to Naomi who was awarded 4 A* grades and is heading to Edinburgh to study Veterinary Science and Lucy who achieved 3 A* grades, confirming her place at Oxford. Jackson and Charlotte also both achieved 3 A* grades, Charlotte will read English at Durham University and Jackson plans to take a year off to work at the Emergency Department at Derriford and hopes to travel to Uganda later in the year.

Cameron, Chiara, Ryan and Richard all achieved triple D* awards in the BTEC with Cameron and Chiara both gaining places at Bath University to read Sport Management and Coaching.

Head Master, Guy Ayling comments, ‘Our pupils’ successes are a reflection of their tremendous efforts over a challenging two years, and I am grateful to staff for outstanding remote learning during lockdowns and for constructing a rigorous assessment framework that gives real meaning and absolute value to these results’. 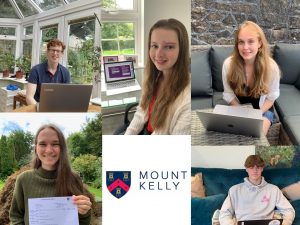 Mount Kelly pupils have followed recent A Level success with another outstanding set of GCSE results. 50% of all grades awarded were 9-7, almost twice the national figure, and over 99% of all candidates were awarded 9-4. Almost 20% of Mount Kelly pupils scored 8 or 9 in 5 or more subjects.

Head Master, Guy Ayling, commented, “The decision to use Centre Assessed Grades has put the individual and not the algorithm at the heart of this process. I am delighted with results that represent the true capability of an outstanding cohort, and all the hard work that they and their teachers have done. We look forward to seeing them all next week as they embark on their Sixth Form studies.” 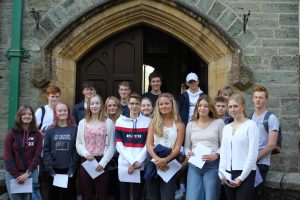 Mount Kelly is delighted to announce another year of strong results: 44% of papers were graded A*- A and 89% A*- C which are both well above the national average.

Nearly 70% of our pupils already have places at their first choice of university confirmed including Alisha Varia – Medicine and Surgery at Lancaster, Jack Bellamy – Engineering Mathematics at Bristol,  Christopher Tanner- Law at Nottingham and Indira Falle – English and Creative Writing at Royal Holloway.

Head Master, Guy Ayling, commented, “With higher than usual levels of anxiety this year, I am especially delighted that the vast majority of our pupils have been given the grades they deserve. They have come through the challenge strongly, with most moving on to the universities of their choice. They will always be able to look back on this achievement with pride.” 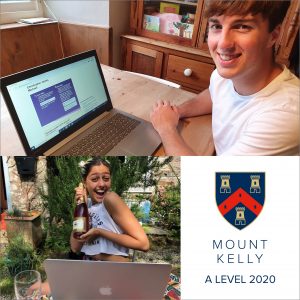 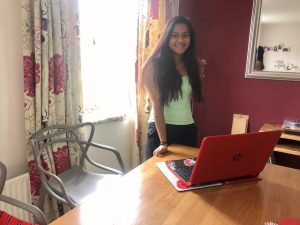 Mount Kelly pupils have followed recent A Level success with another outstanding set of GCSE results.  Over 40% of all grades awarded were 9-7, almost twice the national figure, and over 90% of all candidates were awarded 9-4. 20% of Mount Kelly pupils scored 8 or 9 in 5 or more subjects.

The School’s scientists performed particularly strongly, with 66% of Biology, Chemistry and Physics papers graded at a 7 or above. In the other STEM subjects 70% of Design Technology and nearly 50% of the Mathematics examinations were graded at a 7 and above.

Head Master, Guy Ayling, commented, “I am delighted by these results and all the hard work that they represent, both from the pupils and their teachers. What is particularly impressive is that they have also swum at national level, hiked the various Ten Tors and Duke of Edinburgh challenges, played first team sport or sung in the award-winning Chamber Choir, all of which also take significant commitment and energy. We look forward to seeing them all next month as they embark on their Sixth Form studies.” 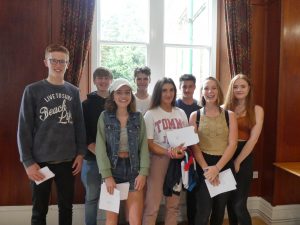 Mount Kelly delighted by another year of excellent A Level results

Mount Kelly is delighted to announce another year of outstanding results with a number of our pupils achieving straight A* and A grades. We are particularly pleased to see the continued strength in STEM subjects (Science, Technology, Engineering and Maths) with over 55% of all papers in these subjects graded at A* or A.

More importantly for our pupils, 76% of them secured places at their first choice university including UCL (Statistics, Economics and Finance), York (History and French), Nottingham (Medical Physiology and Therapeutics), Warwick (Economics) and Southampton (Music). Five pupils have gained significant scholarships to US universities and one to the University of Amsterdam.

Head Master, Guy Ayling, commented, “I am delighted with these results and what they represent. They are a true testament to the hard work of our teachers and the pupils themselves, many of whom have also achieved international success in swimming, Grade 8 in a music or drama exam, the Gold Duke of Edinburgh Award, hiked at least one of the Ten Tors challenges or paddled the 125 mile Devizes to Westminster Canoe Marathon. They all have so much to offer the world beyond Mount Kelly and I wish them every success for the future.”

Following the success of Mount Kelly pupils at A Level, the School’s GCSE candidates have risen to the challenge of the reformed examinations, and secured outstanding results across the board.

Particular congratulations go to the 20% of pupils who scored 9s and 8s in six or more subjects; a clear reflection both of their own hard work and of the school’s ability to enable the most academically ambitious pupils to realise their full potential.

Head Master, Mark Semmence, commented, “It is evident that our pupils have thrived in a more academically demanding climate, and these results are a clear testament to their hard work and commitment.  Having been prepared exceptionally well for their GCSEs, they will certainly go on to further success in the Sixth Form, not only in the classroom but across the range of opportunities that a Mount Kelly education has to offer.” 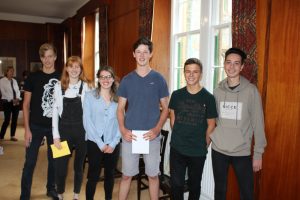 Another Year of Excellent A Level Results

Mount Kelly is delighted to announce another year of outstanding A Level results. 37% of all grades were A/A*, or the equivalent, while 64% of all grades were A*/B, and 83% were A*/C. These figures represent continued improvement on previous years’ results and also significantly exceed the national figures.

A number of pupils achieved straight A* and A grades, while the overwhelming majority of those applying for university have secured places at their first-choice institution, including some of the most popular courses at Durham, Imperial and Bristol.

Head Master, Mark Semmence, commented, “These results are a clear indication of the academic strength of the school, and a testament to the hard work of our pupils and their teachers. Our pupils’ success is not, however, restricted to the exam hall; our Upper Sixth leavers move on to the next exciting stage of their lives not only having secured excellent A Level results, but having also made the very most of the wonderful opportunities that a Mount Kelly education has to offer.” 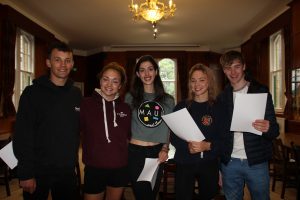