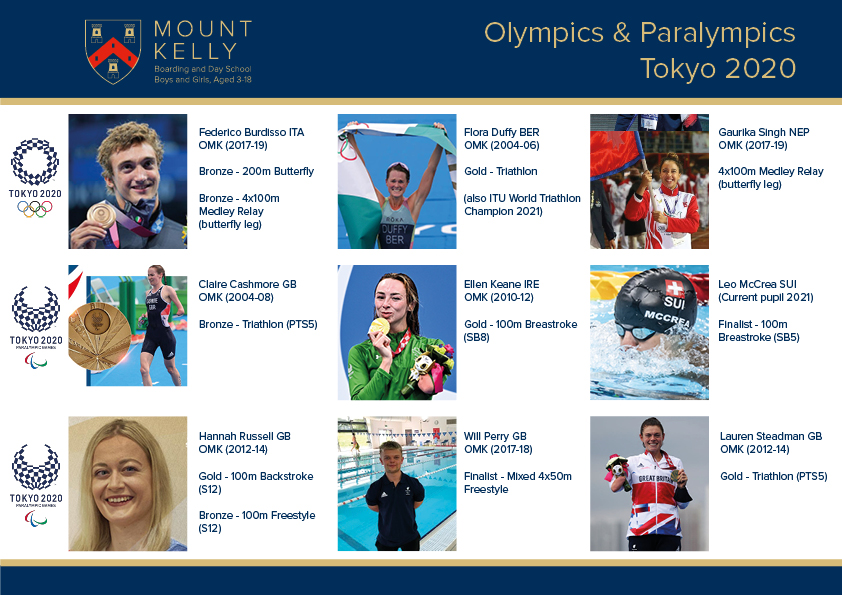 Mount Kelly has featured heavily in the Tokyo Olympic and Paralympic Games this summer – both on the sports stage as well as behind the scenes. As well as having one of our current pupils, Leo, taking part, six out of the eight participating Old Mount Kelleian athletes brought home an impressive haul of eight medals between them (four gold and four bronze). In addition, four OMK Olympians were busy commentating for the media whilst two more OMKs were the coaching inspiration behind several gold medals!

Andy Jameson (1978-83; Seoul 1988 – silver) provided exciting live commentary on the Olympic swimming races for the BBC from within the UK, and we were all delighted when he gave Mount Kelly a ‘shout-out’ as OMK Federico Burdisso (2017-19) won Bronze for Italy in a nail-biting finish! Providing race analysis and commentating from within Tokyo for the BBC screens were Sharron Davies (1978-80; Moscow 1980 – silver) and Mark Foster (1987; Barcelona 1992, Atlanta 1996, Sydney 2000, Beijing 2008). Modern-pentathlete turned triathlete Heather Fell (1995-01; Beijing-2008 – silver medal) provided live commentary from within Tokyo for the the Olympic Broadcast Service at both the Olympics and Paralympic Games in Tokyo.

Behind the scenes as coaches were Olympian and former Mount Kelly Director of Swimming and OMK Robin Brew (1978-80; Los Angeles 1984) who trains fellow OMK and para triathlete Lauren Steadman (2012-14) who secured a fabulous Gold in the PTS5 triathlon, whilst former ITU World Champion triathlete Glenn Cook (1978-81) coached the mixed triathlon GB Team to a Gold victory in this inaugural Olympic event.