Mount Kelly Performance Swimming is the very best solution for combining excellence in swimming and a fully integrated academic programme. 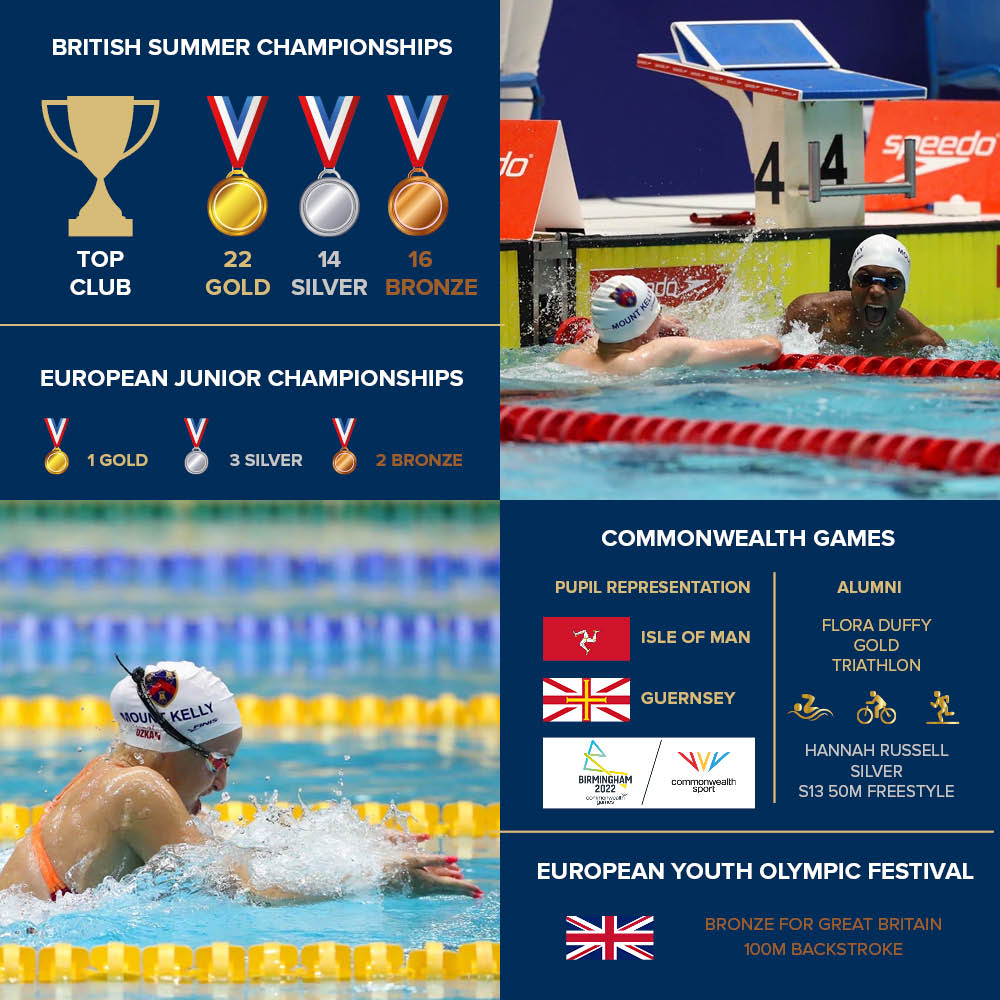 Mount Kelly Swimming, founded in 1978, has helped coach, educate and develop some of the finest swimmers in the country. During this time, we have produced more than 100 International Swimmers, 36 of whom have competed at Olympic and Commonwealth Games, winning a total of eight Olympic and sixteen Commonwealth medals. Our track record in Para Swimming is equally impressive winning a total of 27 Paralympic medals across the 2008, 2012, 2016 and 2020 Games.

Since the arrival of our 50m Olympic Legacy Pool in September 2016, Mount Kelly has seen unprecedented growth and success at all levels, the pinnacle of which was winning the highly prestigious National Arena League Cup Final on our debut appearance in March 2020 and then going on to retain this title in 2022.

The 2021-2022 season has been our most successful to date with a record twelve swimmers selected for international competitions. Matthew Ward, Calvin Fry, Erin Little and Hollie Widdows competed at the European Junior Swimming Championships in Romania all returning home with medals. Blythe Kinsman was selected for the European Youth Olympic Festival and Harry Robinson and Ronny Hallett have been selected for the Commonwealth Games for the Isle of Man and Guernsey respectively. Leo McCrea won a silver medal at the IPC World Championships and Hazal Ozkan represented Turkey at the European SC Championships; while Ella Bainbridge, Leah Whittaker and Sam Williamson all attended the World School Games in France.

As well as this over 100 Mount Kelly swimmers have qualified to the British Summer Championships and home nation meets in 2022 and have big aspirations as we look to the further.

Noticeable alumni include Federico Burdisso who recently won gold at the 2022 World Aquatics Championships in Budapest in the Men’s 4x100m Medley Relay and took home two bronze medals in the 200m Butterfly and 4x100m Medley Relay at the Tokyo Olympics. In addition, Flora Duffy remains a force in the triathlon world and won Gold in the Women’s Triathlon in Tokyo and has now represented Bermuda at 5 Commonwealth Games.

Mount Kelly Swimming offers a launch pad for swimmers who are aiming for national and international representation including European, World and Olympic Games. It is our intention to provide the best possible preparation for talented athletes who are looking to work hard and immerse themselves physically, mentally and academically in our exciting and unique swimming programme for talented swimmers aged 8-18 years.

We have an incredibly experienced and dynamic coaching team and would strongly advise any swimmer wanting to find out more information about swimming at Mount Kelly to make contact with our Admissions team.

You may also wish to complete the Swim Squad Application Form on the Swimming Awards page:

Mount Kelly Swimming plays a fundamental part in the success of the School which, in turn, is fully committed to the development and progress of the Programme. We aim to nurture young talent and support them as they follow the British Swimming and Swim England pathways. Swimming teaches self-discipline, team work, leadership, communication and resilience – all of which are important to a full and rounded education.

Alongside this we aim to foster a love of training and develop life-long habits to sustain and motivate our elite performers so that they continue to train and compete long after they have left the School.