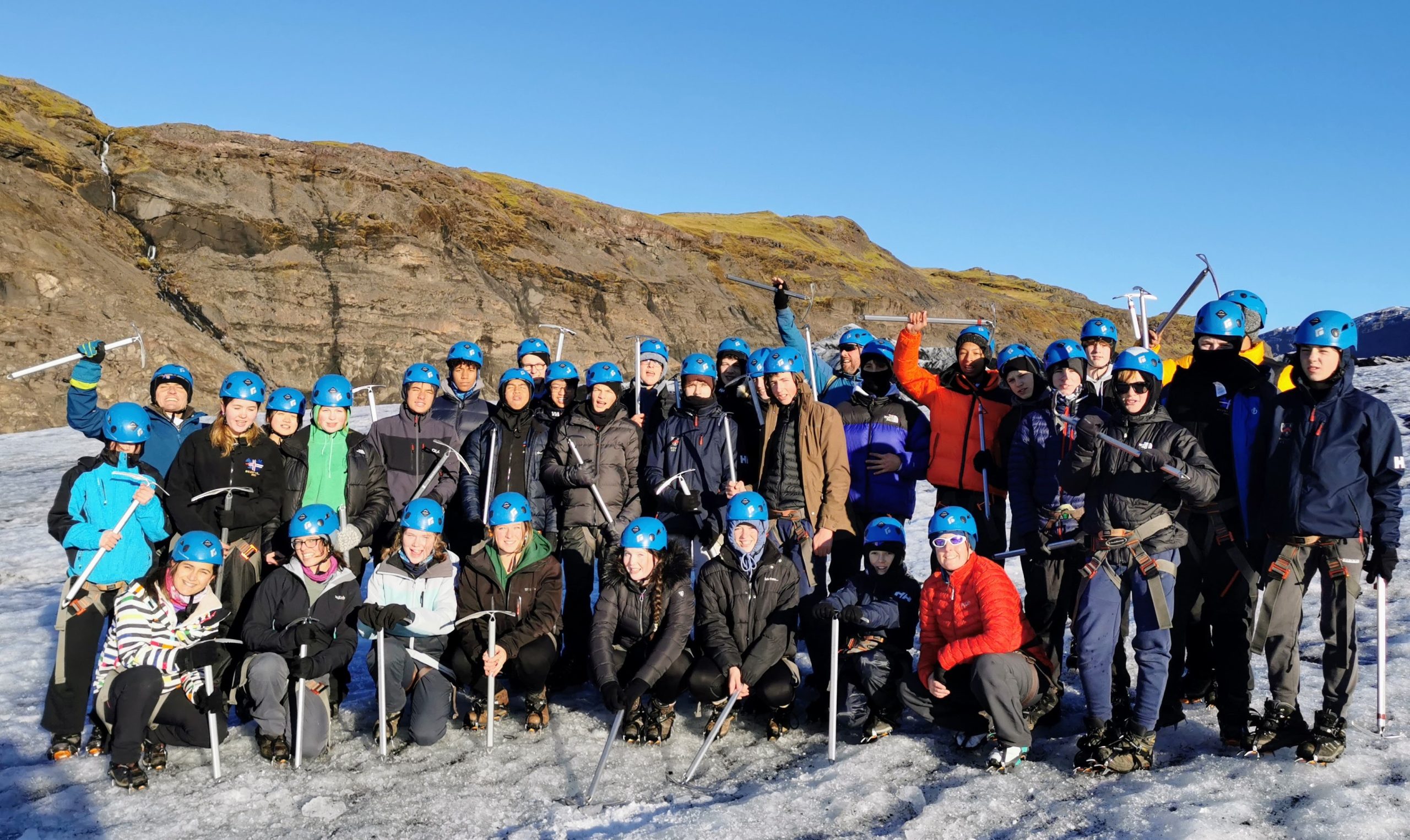 Over 30 Mount Kelly pupils travelled to Iceland during half term, accompanied by Mr Francis, Mr Prettejohn and Mrs Kelly. A short flight from London took them to one of the most spectacular countries in the world; a land of fire, water and ice where nature reigns supreme. A mesmerising mix of clashing waterfalls, mighty glaciers and bubbling geysers awaited them, along with a rich heritage brought to life in bloodthirsty Viking sagas and stories of the hidden people and trolls which are as otherworldly as the surrounding landscape.

With over 30 active volcanic systems and up to 1000 earthquakes a year, Iceland is very much a geologically active country. Pupils visited recent lava flows from July last year which were beginning to solidify. They travelled in the shadow of numerous volcanoes including Eyjafjallajokull which last erupted famously in 2010. Everywhere the landscape is dominated by black and brown igneous rock twisted into eerie shapes that give rise to folk tales of trolls.

The heat coming out of the earth and the rivers of Iceland provide it with a cheap and plentiful renewable power supply, something to be envied in this day and age. Numerous Geothermal and Hydroelectric power stations are dotted about the country, and pupils were able to visit one to learn how the technology works.

The hot water in Iceland literally gushes out of the ground and the group witnessed this at Geyser, where they saw water and steam shooting 20 meters into the air, alongside pools of boiling water, with the bright mineral-induced colours of ultramarine, pink and ochre and the overwhelming smell of rotten eggs from the sulphur. A benefit of this plentiful supply of water is the outdoor pools and hot springs, and a trip to the secret lagoon (the oldest swimming pool in the country) allowed pupils to swim in 38-degree water on a day when the outside temperature was 2 degrees.

Numerous glaciers feed rivers which drop down to the sea as waterfalls. Being able to get behind the curtain fall at Seljalandsfoss as the sun was setting provided a fantastic backdrop for budding photographers. Ice covers over 10% of Iceland mainly in the form of Ice Caps and Glaciers. The team ventured onto the Solheimjajokull glacier, a small glacier that is now fast retreating back into the mountains. Being on the ice in crampons was excellent fun, with clear blue sky above and spectacular views down valley. Pupils were able to see where the glacier had reached in the 1990s when Mr Francis first visited, bringing home the challenges we face with global climate change.

Iceland was settled a little over a thousand years ago and it is hard to imagine how these first settlers managed to survive in the barren landscape of the country. The present-day small towns and villages are on the sites of the original settlers’ houses, where history and mythology permeate the landscape.

The appearance of the natural phenomena of the Aurora Borealis (or Northern Lights) provided a bonus high point of the trip. Words and pictures do not do justice to such amazing sight! An excellent time was certainly had by all.